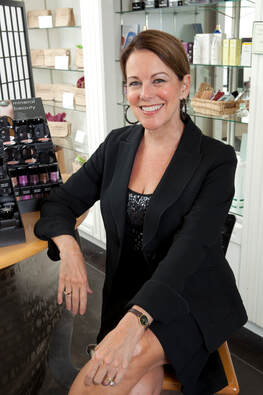 ​Patricia Owen began her career in St. Louis, Missouri in 1977 as a Promotional Assistant and make-up artist for Estee Lauder cosmetics. She was later promoted to Training Associate and conducted training programs for Estee Lauder Beauty Advisors in the St. Louis area. Married in 1980 to Jay Owen, Patricia relocated to Detroit, Michigan where she continued her career in cosmetics as a Special Events Coordinator and Regional Educator for Estee Lauder in a tri-state area. The couple relocated to Hilton Head in 1983 to open a women’s retail clothing store and shortly thereafter acquired the rights to have the Island’s only Estee Lauder department.

Patricia Owen is not only the owner of FACES, but is a seasoned professional in the beauty business. She possesses a different set of skills than being a service provider turned entrepreneur, which makes her better equipped to handle the tough day to day business decisions. As a result, she is able to compete with newer, larger spas that often have the financial backing of large corporate hotels. In addition to her role at FACES, Patricia and her husband have a spa consulting business, Engineered Spa Systems, and have been hired for several very successful spa startups in South Carolina and Georgia.

In addition to her devotion to her business, Patricia Owen is dedicated to her community. Patricia served on the Board of Directors for the Hilton Head Island-Bluffton Chamber of Commerce for several years and was appointed to the Executive Committee. She also served as Chairman of the Chamber’s Small Business and Minority Council. For almost 20 years, Patricia was the Chair Person for the annual Celebrity Golf benefit tournament that raised over $2 million for local children’s charities.

Patricia was the 2006 SBA Small Business Person of the Year for South Carolina, the first place runner-up for the SC Small Business Person of the Year in 2005 and a finalist in the national Enterprising Women of the Year Awards for two years in a row. In 2004, Patricia won the SBA’s Entrepreneurial Success award for the state of South Carolina as well as for the southeast district that includes eight states. In 2006, she was a finalist for the national Stevie Awards for Women Entrepreneurs. Over the years, Patricia has been a recipient of the Total Woman award co-sponsored by the Island Packet, was profiled in Hilton Head Monthly magazine as one of a dozen “Intriguing Islanders” and has been the recipient of the Small Business of the Year award in 1996 and the Small Business of the Quarter Award for Fall 2002, presented by the Hilton Head Island/Bluffton Chamber of Commerce. A much requested speaker for various groups which include Leadership Hilton Head, Patricia was also a keynote speaker at the national SCORE meeting that was held on Hilton Head Island.

From the very start, Patricia has built a personal relationship with her customers and staff and frequently says, "I work for my employees in a vocation that I love. Since they are the real face of the company, I want to make sure they're happy." As one who is at the forefront of the “Baby Boomer” generation, Patricia feels “uniquely privileged” be in the health and beauty industry and to be able to provide the very latest in products and services designed to improve and enhance a person’s quality of life. She attributes her unshakeable faith and steady moral compass for her success. According to Patricia, “the best part of owning a spa is making a difference for people, especially at such a time in our history when being “over 50” can still be “fabulous”.